Fluffy tufts On Your Tree Bark? It Could Be Gypsy Moth

Do you see fluffy tufts that look like these sticking to the bark of your tree? Chances are, they're egg mounds. Gypsy moth is native to Europe and was introduced to North America in about 1869 near Boston in an attempt to breed with silk worms. After escaping cultivation, their populations moved throughout eastern, central, and some western parts of the United States. It's also now well established in Toronto, Niagara, and other parts of south eastern Canada.

Gypsy moth can completely defoliate trees, especially hardwood species. Oaks are most affected, while silver maple, Norway maple, black cherry, crab apple, poplar, birch, and willow are also affected but usually with less damage. Most trees can tolerate defoliation, but not repeatedly, and when struck by drought or disease this can lead to mortality. Some species are more sensitive to defoliation than others. For example, one season of spruce defoliation can cause to death of the entire tree. Trees kept healthy are more likely to withstand these stresses.

Gypsy moth populations fluctuate; rise every few years then decline due to natural predators. Male moths are smaller, darker beige in colour, and can fly as opposed to the females. Eggs are laid in late Summer, and remain until early spring. They overwinter in masses usually sticking to the surface and crevices of tree bark. There are about 300 to 1000 eggs per mass.

Luckily there are some naturally occurring measures to control gypsy moth populations. Parasitic wasps and flies destroy about 30% of eggs before they hatch. A Fungus introduced from Japan (entomophaga maimaiga) and the virus (Nuclear Polyhedrosis) infect and liquify the caterpillars. Cold weather also controls populations, however, consistently freezing temperatures need to be maintained for a couple of weeks in order to prevent seeds from hatching.

Caterpillars emerge in mid-May and are usually noticed into July. The initial small caterpillar stage is most vulnerable to pesticides. They must be caught early as there is no control option at the mature caterpillar stage or adult moth stage. Caterpillars feed for up to 7 weeks and can grow up to a few inches in length. Droppings (frass) drop from the tree in large amounts as they feed. As voracious eaters, 1 caterpillar can consume a square meter of leaves in its lifetime. Caterpillars pupate (coccoon) from late July to August and emerge as moths a few weeks later.

Home owners can take preventative and reactive measures to control gypsy moth infestations in their trees. An effective preventative measure is to first eliminate the eggs. Scrape off egg sacks/mounds and destroy them (make sure they don't fall to the ground). Burlap wrapping can be used in mid to late summer to control caterpillar populations. Wrap layered burlap around the trunk and allow caterpillars to enter within the layers to find shelter. Scrape the hiding caterpillars into a pale of soapy water to kill them. 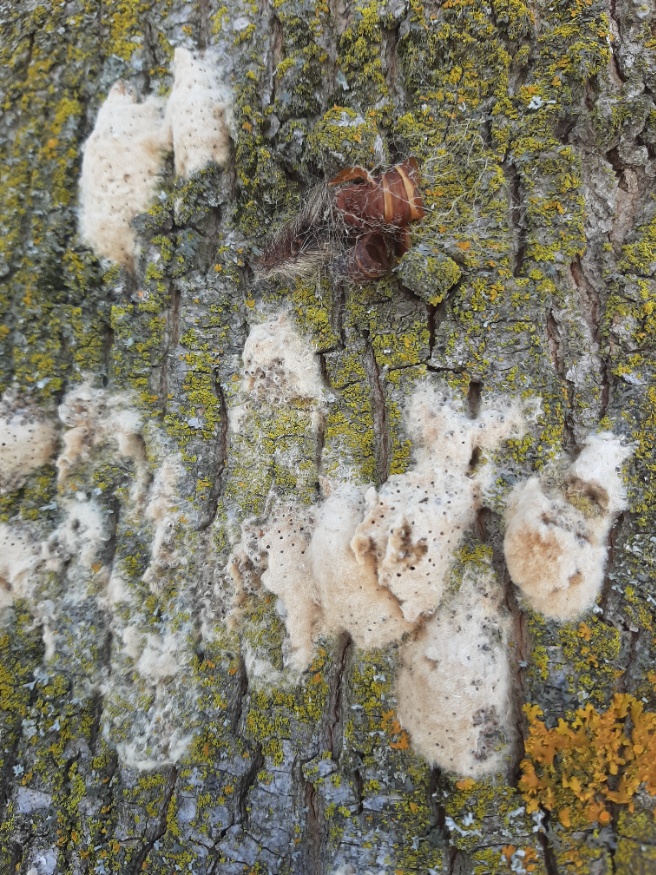 For large populations, professionals use organic BTK spray which contain the active ingredient Bacillus thuringiensis, a natural soil borne bacteria to destroy the larva digestive system of anything in the moth and butterfly family (lepidopterans ). This must be done in one application at early stages when eggs begin to hatch. Caterpillars must eat the foliage covered in the pesticide in order for it to be effective.

Other options are injections into the trunk using a neem-based product called TreeAzin. Repeated injections could damage the tree's health so only a one time injection is applied. A mating disruptor can also be used after moths pupate. A waxy droplet containing female moth pheromone is sprayed in the surrounding region of infested trees. Its scent floods the area, confusing the males, preventing them from finding females. Since males are at the end of their lifecycle, they often die without mating. These are only effective to prevent moths from mating and keeping them from spreading beyond their current range. Traps can also be placed to determine where populations are heading. They contain pheromone a strip to attract the females, working in a similar way as the mating disruptor.

Gypsy moth populations continue to spread westward, and northward as climate change allows for milder weather. Since it is a non-native species, natural predators can only do so much to control gypsy moth outbreaks. Both cities and home owners need to work together to stop the spread of gypsy moth and protect both our forests and urban trees.